Translation to review
Don't blame the contributors, but come and help them 😎 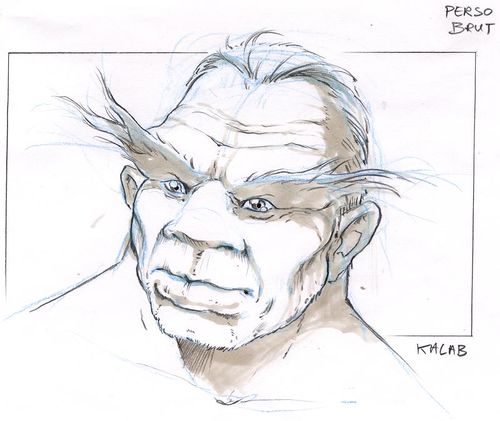 The Kalabs are one of the most mysterious homin races. Their name is mentioned only in a few texts on the creation of homins [2][3] . Contact with hominous civilizations must have been severed probably long before the Great Swarming of 2481 since none of the historical texts mention them. In any case, they have never been seen on the New Lands of Atys. It is therefore possible that this race has been exterminated, unless it has found refuge on its own side, following events that we have no record about. What is known about them comes from scattered elements (especially drawings), related to ancient times, which were found after the exodus either by explorers or from the archives of families who had donated them to the Great Library. In addition, during the Second Swarming, many documents were lost along with notes describing their origin. Finally, some drawings are probably copies of older documents, and it is impossible to assess the part of the imagination of their authors, as shown by their diversity. Some adventurers, however, secretly dream of finding their tracks and, who knows, forging links with them if they have survived. 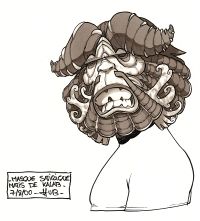 As mentioned, the documents concerning the Kalabs are very imperfect and questionable. Nevertheless, an exceptional matis document, representing a satirical mask of Kalab, as well as the many common points between the various representations, make it possible to a certain extent to establish a rough image of what this civilization could have been:

The Kalabs would have formed a warm and ambitious nation.

These unbounded giants, characterized by their physical power and joviality, would have lived in a humid and lush jungle.

This people, with their developed mechanical engineering and ability to create complex automatons, would have dug their cities in giant calabashes suspended above the void and in which the sound of pistons and hydraulic elevators resonated.

Great merchants, fine negotiators (?), they would have been above all a building people with great political intelligence.

According to the legends

The Kalabs would have been created from a mixture of 2 saps [3], droplets of the sap of the Venerable Tree and drops created by the Matis. They have a large stature but are of unstable nature. They have long needed exoskeletons to ensure their union.

Facsimile exhibition of the Great Library archives, related to the Kalabs.

Portal of Atys, the planet