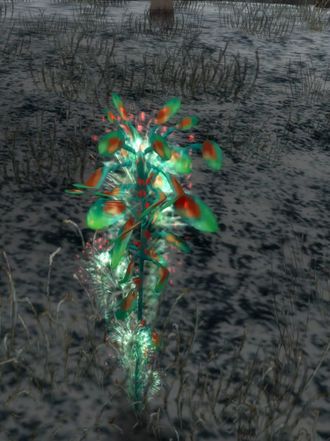 The suvue is a legume that produces pods filled with small edible seeds.

The Trykers use them in their diet as they are, or crush them into flour to elaborate more complex dishes.

This plant has the peculiarity of fertilizing itself; in fact the leaves include brownish capsules that collect spores.

A plume of whitish fluff that develops from the plant's single bulb produces them. It is not rare, however, to happen upon an isolated plume sowing its spores at the whim of the wind to meet more distant female plants.

It should be noted that the suvue, endemic in Lakes, has been acclimatized by the Matis to be grown in forest and jungle.